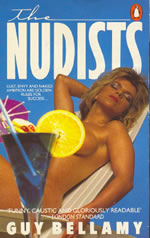 It is a lazy summer of beach umbrellas and blistering heat. The sea is warm, the sky is blue and life is good – or is it?

The Venables’ sun-drenched honeymoon takes a new direction when bridegroom Simon meets a former Page Three girl relaxing in a Mediterranean bar. And surprises of a less pleasant nature are in store for young advertising millionaire Ben Brock when the pharmaceuticals market begins to shrink.

Meanwhile, penniless Nick Bannerman, furiously writing a book on woman’s inhumanity to man, receives his due and more besides as his past catches up with him and his future begins to expand.

When the three parties find themselves together on a vacation to remember, all is revealed, and their crossed destinies become further entwined, for better, for worse, both richer and poorer.

In this masterful comic invention, displaying all his pungent wit and subtle venom so characteristic of his earlier novels, Guy Bellamy strips the veneer off life in the last quarter of the twentieth century and, once again, succeeds brilliantly.