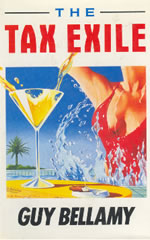 From a position of acute poverty – no job and the rent owed – Fred Carton is suddenly plunged into a situation where a year’s stay in Monte Carlo will save him a Capital Gains Tax bill of £600,000.

But he has managed to find the money for only one previous trip abroad, he doesn’t speak French and the girl he has his eye on is busily at work in England.

So is his friend Dermot Ryan, who has a junk stall and a stormy marriage to attend to. The idea that his poorest friend is considering become a tax exile fills him with horror. ‘I always thought that exile was one of the saddest words in the language,’ he says.

‘Not half as sad as tax,’ says Fred.’But put the two together and what have you got? A happy man quaffing champagne under a sunshade while topless ladies frolic in the pool beside him. At least, I hope that’s what you’ve got.’

What happens surprises them both, as Dermot Ryan’s marriage, collapsing under flying kitchenware, spills over on to the Cote d’Azur, and Fred finds that saving £600,000 from the greedy hands of the government can produce feelings of guilt as well as triumph.