Undercover War : Britain's Special Forces And Their Battle Against The IRA
Harry McCallion 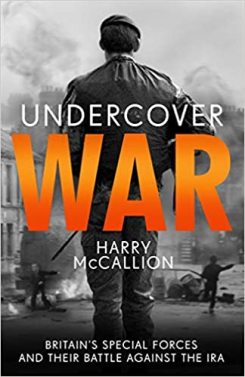 When the British Army was sent into Northern Ireland in 1969, neither they nor the politicians who authorised their deployment had the slightest idea that the longest military campaign in British Army history was just beginning.  For the next thirty years, Britain’s Special Forces engaged in a ferocious struggle against an implacable, ruthless and unrelenting enemy.  While patrols and petrol bombs, explosions and incendiary speeches, are the defining images of The Troubles, the real war was fought out of sight and often out of mind.  The details of its campaigns and operations are, in many cases, still unknown.  Undercover War tells this true story in full for the first time.

The book starts by setting out the initial developments of the undercover war. Chapter 1 begins with the disturbing history of the Military Reaction Force (MRF), a unit that was so badly thought out, organised, and trained that it degenerated into what can only be called a death squad.  Chapter 2 picks up the story from the disbandment of the MRF and narrates the first deployment to the province of the SAS and the creation and training of 14 Intelligence Company, an elite surveillance unit otherwise known as ‘The Det’. Chapter 3 gives a detailed account of early Det operations from 1974 to 1980, while Chapter 4 tells the story of the second SAS deployment to the province, lasting from 1976 to 1980.

Chapter 5 summarises the lessons learned from the first decade of the conflict, discussing the wholesale reorganisation of British forces and the starting positions for a new, more unified phase of the undercover war.  Chapters 6 and 7 provide parallel accounts of SAS and Det activities between 1980 and 1985, leading towards the turning point at which the upper leadership of the IRA began to accept that a military victory was no longer possible.  Chapter 8 changes perspective and outlines the origins, nature and structure of the various Republican paramilitary groups from 1969-1987.

In Chapters 9 to 11, we read about SAS operations in the late 80s, including the major success at Loughgall and the controversial killings in Gibraltar.  Chapter 12 charts Det operations from 1985 to 1995 and describes the actions of 9 Det, a new unit which recruited exclusively from Special Forces regiments. In Chapters 13 and 14 we follow SAS operations in the 90s, including the final destruction of the notorious East Tyrone Brigade. Chapter 15 closes the book with the author’s reflections on the morality of the undercover war and compares the restricted operations in Northern Ireland to the new form of unrestricted anti-terrorist warfare pursued in the wake of the 9/11 attacks on the US.

Harry McCallion is in a unique position to write a comprehensive account of the undercover war in Ireland from the British perspective.  Harry is the best-selling author of the ‘SAS memoir’ Killing Zone .  Killing Zone stands out among the other major memoirs of the 1990s for its unflinchingly honest portrayal of the brutality of life in the Special Forces and its refusal to fetishise or glamourise the business of killing.  This kind of honesty is essential for the writing of a history of undercover operations during the Troubles.     &nb...
More about Harry McCallion