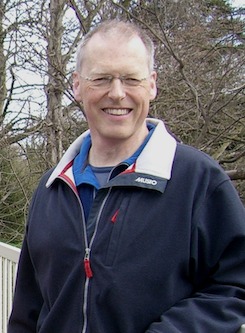 Hugh Brazier was born in Bristol, and grew up there and in the Black Mountains in south Wales. He has a first-class degree in English from the University of Cambridge, and an MA in Library and Information Studies from University College London. He worked for many years as an academic librarian in Dublin, mostly in medical libraries, before moving to York and becoming a freelance editor in 2002. He specialises in medicine, zoology, and sailing books, and his regular clients include Cambridge University Press, Wiley-Blackwell, and HarperCollins.

Hugh is a birdwatcher, a dinghy sailor, and an occasional boat builder. He has studied puffins on cliff-bound islands off the west coast of Ireland, and he has managed websites for sailing clubs. He edited the journal Irish Birds for several years, and he has written several peer-reviewed articles on medical education, evidence-based medicine, and ornithology, but The Book of 365 is his first book.

Very simple, really. Jan McCann and I thought we’d better try finding an agent for our book proposal. Searched the web. Picked out Andrew Lownie as the right sort of agent (high profile, good website, handling the right sort of book), and decided to give it a go. Emailed the proposal, expecting to hear nothing for weeks. But Andrew phoned me within twenty minutes, and 24 hours later we had a reader’s report and an offer to take us on.