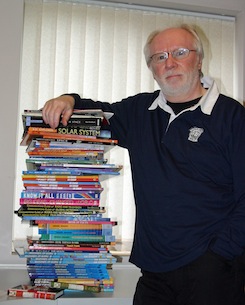 Ian Graham was born in Belfast in 1953. In the 1970s, he took a degree in applied physics and a postgraduate diploma in journalism at The City University, London. In the early 1980s, he worked as a magazine journalist and editor in London before becoming a freelance writer and moving to rural Norfolk.

Ian has written more than 240 books, mainly illustrated non-fiction books for children and teens, on science, technology and engineering topics ranging from space exploration, aviation and forensic science to energy, inventions and science experiments. He has also written graphic novels based on the stories of A Midsummer Night’s Dream and Robinson Crusoe.

I wrote several book proposals in 2011 and decided to send them to a literary agent. I researched all the agents listed in the Writers’ and Artists’ Yearbook, visited their websites and picked out Andrew Lownie’s agency as the first to contact.