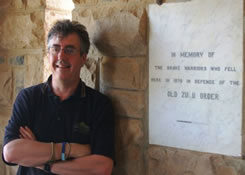 Ian Knight has studied the Anglo-Zulu War for more than thirty years, researching both in archives and on the field, walking the battlefields and collecting oral traditions from Zulus whose forebears took part. He is the author of a number of specialist books on the subject including Brave Men’s Blood and the award-winning The National Army Museum Book of the Zulu War (which shared the Royal United Services’ Institute’s prize for Best Military History in 2003. He has appeared in and advised on a number of television documentaries including Channel 4’s Secrets of the Dead and BBC’s Timewatch He lives in Sussex.

It was at the suggestion of Ingrid Connell at Macmillans that I first came to the Andrew Lownie Agency in 2005.