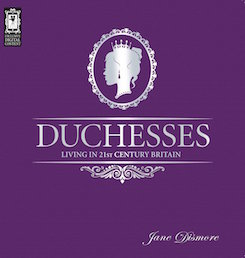 The title of duchess has long been part of Britain’s history yet it can evoke mixed images.  It is associated with the grandeur of stately homes that many love to visit, but also with unearned privilege. For some it is the epitome of glamour and wit, as personified by Georgiana, Duchess of Devonshire; for others, the futility of pampered existence. Perhaps above all it feels like the aged title it is, one whose shelf life has expired. But in April 20l1 the title was taken out of its antechamber, dusted off and deposited firmly in the High Street and on the internet: giving an old title to a young lady as twenty-first century as the Duchess of Cambridge was to make it topical, even desirable, again.  Yet despite the Queen awarding Prince William a dukedom, the future for dukes, especially non-royal, is not bright. There are only twenty-four left in Britain today: they, and therefore their duchesses, are an endangered species. Yet little is known about these women or what their relevance is in today’s Britain.

The author decided it was time to discover these elusive creatures and managed to persuade ten of Britain’s remaining non-royal duchesses to talk of their lives and their roles in the twenty-first century. Most never speak publically; those who do seldom speak about themselves. Those featured are the Duchesses of Bedford, Rutland, Northumberland, Buccleuch, Argyll, Montrose, St Albans, Abercorn, Leinster and Somerset. The book discusses aspects of their lives and shows that there is no such thing as a ‘typical’ duchess. None shares the same role, riches or worries. They come from surprisingly different backgrounds. What they do share, regardless of their degree of wealth - and even, in three surprising cases, where the transition to duchess was unwelcome – is a huge sense of privilege in being entrusted with the task of preserving and continuing Britain’s heritage. They all hold varied views on the current debate about women inheriting titles; while the rules on primogeniture may have been scrapped for royalty, those that govern the succession of dukedoms mean that the pressure on the duchesses to produce a male heir is as great as it was centuries ago. Above all, the duchesses are women who sit at the top of the aristocratic tree in an age when privilege is not a popular concept. The book also sets each duchess in the historical context of her title, for they all have in common a marriage into families whose ancestors helped shape Britain’s history; each duchess also selects a predecessor who has made a particular impact on her.

Jane started writing on a freelance basis for national magazines while teaching Drama and English Literature to A-level in comprehensive schools. A complete change of lifestyle saw her running private yachts in the Mediterranean for several years, which led to travel writing – often undertaken between negotiating protection money with local mafia chiefs and trying to avoid floating mines off the coast of Albania.  While teaching Spanish students and the British Army in Gibraltar, Jane had a regular radio slot, writing and presenting features for the British Forces Broadcasting Se...
More about Jane Dismore