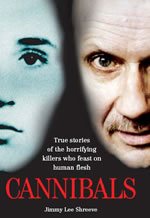 Cannibalism, or 'anthropophagy', is the eating of human flesh and organs by another human. The term comes from the Arawakan language name for the Carib Indians of the West Indies, who were notorious for dining on their own kind. The very idea of cannibalism is utterly repulsive and abhorrent to the vast majority of us (even if we eat meat and fish in our daily diet). Yet the practise was widespread all over the world in prehistoric times, and it is still believed to exist in remote areas of New Guinea. What's more, if survival depends on it, us humans will eat the flesh of our own kind (who have died) to stay alive, as happened when an airline crashed in a remote area of the Andes in the 1970s.

Chillingly, some people's taste for human flesh is so strong that they resort to slaughtering others to satisfy it. Two years ago, for example, a Mexican man killed his gay lover in a drunken, drugged fight, then cooked the man's body in tomato and onion sauce and ate it over three days. Police found Gumaro de Dios Arias grilling rotting human flesh for his breakfast, including part of a heart, when they raided his shack.

In Germany, in 2001, there was the case of Armin Meiwes, who advertised on websites for 'young, well-built men aged 18-30 to slaughter'. Amazingly, he got a taker - one Bernd-Jurgen Brandes. Meiwes told investigators that he took Brandes back to his home, where Brandes agreed to have his penis cut off, which Meiwes then flambéed and served up for them both to eat. Meiwes said he then killed Brandes with his consent and went on to eat 44 pounds of his flesh.

Back in the 1920s Albert Fish, dubbed America's Bogeyman, raped, murdered and ate a number of children, and claimed to have experienced immense sexual pleasure as a result. And in Wales, in 2002, teenager Matthew Hardman was found guilty of murdering his elderly neighbour and drinking her blood - having first launched a brutal and bizarre attack on her, which included ripping her heart out.

FORBIDDEN FLESH covers many grotesque and stomach-churning cases of contemporary cannibalism - revealing that outwardly normal people have murdered and eaten their own kind. It also looks at how all cultures have eaten human flesh at one time or another in their history. In some cultures it was acceptable up to recent times. In Papua New Guinea, for example, tribes allegedly consumed their Japanese enemies during World War II, which was an admissible part of their culture.

The book also asks why it is people have long been driven to eat their own kind, drawing on psychologists, criminologists and anthropologists for answers.

FORBIDDEN FLESH is written in a narrative style, much like Tom Wolfe used in his non-fiction title The Right Stuff, and has elements of the "on-the-scene" reporting approach used by Mark Bowden in Black Hawk Down and Finders Keepers. 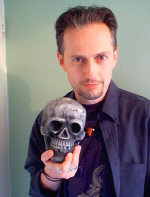