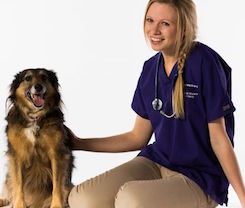 Jo Hardy studied to become a vet at the Royal Veterinary College. After the most demanding 5 years of her life, she graduated with honours in 2014. However her last year in vet school was far from normal. Day in, day out, she had a film crew with her filming the highs and lows she was experiencing, as well as the heartwarming animal cases that came and went from her life, for BBC 2’s “Young Vets” series. In August 2014, the 10 part series was aired on national television and was met with a fantastic response from television critics and the general public alike.

In Jo’s spare time, she likes to spend time with her horses, Elli and Tammy, who spend most of their lives as expensive lawnmowers. She also has a passion for travelling, and regularly visits South Africa to visit her long-distance partner, Jacques, as well as helping out a local wildlife vet.

Jo also is an active supporter of several charities. She works closely with “World In Need” to provide veterinary services to rural areas in the north of Uganda. She also is a supporter of “Save the Rhino” and has spent a lot of time up close with rhinos in South Africa, working towards rhino poaching prevention.

On contacting Andrew via email with a proposal for the book, he immediately got back to me asking to phone. I was surprised as I was expecting about a 4-6 week turnaround before a reply. When talking to him, it was so exciting to hear that he shared the same enthusiasm for the book as I did, and quickly brought in Caro Handley to work on the book as well.