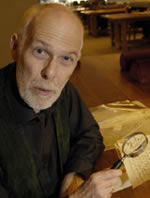 There was this publisher, this magazine editor and this literary agent . . . guests at a university information session. The literary agent was wonderfully young and wore a smart, red-striped shirt. He told the tale of a biographer whose book had been far too long, in spite of what he and the publisher had insisted. And how the book had sunk without trace. He talked simple good sense. I thought: 'if ever I need an agent - he's the one I'll ask to take me on'. And so I did.