Anything to Declare?: The Searching Tales of an HM Customs Officer
Jon Frost 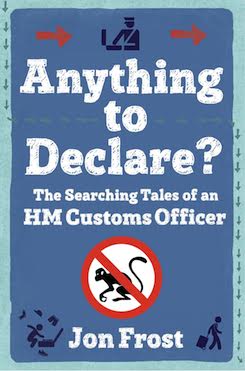 Anything to Declare? The Searching Tales of an HM Customs Officer is the first ever behind-the-scenes memoir exposing the life of a HM Customs officer confronting the constant parade of smugglers attempting to enter and leave the country. The long queue runs the full gamut from battle-hardened drug gangs smuggling lorry loads of heroin to a group of nuns trying to bring through water bottles full of gin. The full spectrum runs from the C of E vicar who is discovered with child pornography hidden in his underpants to that of known gun parts being shipped out to Saddam Hussein in Iraq.

Whenever anyone undesirable lands on Britain’s shores - heroin smuggler, gangster, child pornographer, drug mule, arms dealer, human trafficker, cocaine importer - Her Majesty’s Customs officers are the first encounter they will have and the last border defence that we employ. If the criminals get through undetected they can slip into the country, lose themselves in an underworld network and continue to operate and to ply their trade. So between the influx of contraband such as class-A drugs, potentially fatal fake medicines, illegal pornography, weapons, human cargo and even wild animal meat stands only the hard working, often maligned figure of the uniformed customs officer.

Anything to Declare? The Searching Tales of an HM Customs Officer series follows the long, distinguished career of Jon Frost from his first posting in uniform in airport Preventive work to the dangerous and sometimes violent work of following, surveilling and arresting hardened criminal drugs gangs at home and abroad, to international co-ordination work as a Investigation Intelligence Specialist for the Serious Organised Crime Agency (SOCA).

As Frost says: ‘That feeling passengers have as they walk through customs is much worse for the smuggler bringing in things that may hurt you and yours. We want them to feel that. And you would too if you saw the things we find. We may be the first unfriendly face you see, but we are the last border defence.’

‘We trusted no one; and, fortunately (or not), it usually paid off. Before me in the airport would be a long queue of faces - behind me was 88,000 square miles of Great Britain. UK Customs and its officers stood between the two. But there is something about some parts of the job - having to search a corpse in a coffin just back from Benidorm, for example - that makes you wonder how you got here.’