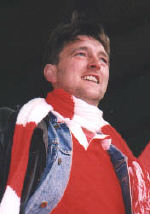 Jon Latimer was born in Prestatyn, Flintshire in 1964. He attended Swansea University in 1982, ostensibly to study Geography, but love of the sea meant that he left with a degree in Oceanography instead. He then enjoyed a varied and interesting career working as an oceanographer and environmental scientist.

Jon also served in the Territorial Army for sixteen years. Commissioned in The Royal Welch Fusiliers he served with the 1st and 3rd Battalions and with 4th Battalion, Royal Regiment of Wales, as well as on attachment with 1/15th Royal New South Wales Lancers and with the staff of 4th Armoured Brigade.

When I was looking to write my first book, Deception in War, I followed the advice in Susan Page's How to get Published and Make a Lot of Money. One thing she recommended was to choose an agent from the acknowledgements by an author writing on a similar topic, and Andrew was thanked by Adrian Weale in his book Secret Warfare. I wrote to Andrew explaining that Adrian was a fellow officer in my TA unit and implying that he had recommended Andrew to me, although I had not actually met Adrian - but then it was a book about deception after all.