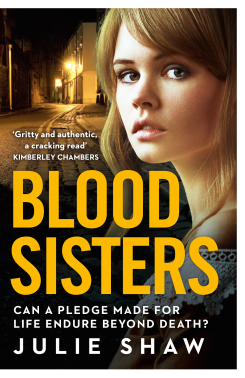 Lucy And Vicky, both raised in Bradford, have been the best of friends since nursery school, and from the age of twelve, when they made a secret pledge of undying loyalty, they have been Blood Sisters as well.

But now they are young woman, and that loyalty is about to be tested.  In Lucy’s case, by her relationship with copper’s son, Jimmy, and his sworn enemy,  Paddy, local bad boy and small-time criminal - who Jimmy's dad is determined to see behind bars, and also happens to be Vicky’s boyfriend.

Set in the gritty urban landscape of late 1980’s Bradford, Blood Sisters  tells the story of a friendship torn apart. Of two young woman whose bond will be stretched almost to breaking point, each of them determined to stand by her man and, in Vicky's case, by her child -  Paddy's daughter.  But, when animosity turns to hate, and hate leads to murder, the pledge they made in blood could not matter more. But will they be able to find their way back again?

Julie Shaw is a writer and an entertainer. Born and raised in Bradford, West Yorkshire she now lives by the coast in Bridlington where she can be seen singing or presenting shows around the seaside resorts. She is married with two grown up children and 5 grandchildren and fits her writing around her busy lifestyle.  Julie likes to write about the tough things in life and doesn’t shy away from ‘telling it like it is.’
More about Julie Shaw,

Lynne Barrett-Lee was born in London and became a full time writer shortly after moving to Cardiff in 1994. She is the author of eight novels, including her acclaimed debut, Julia Gets a Life, and Barefoot in the Dark, which was shortlisted for the 2007 Melissa Nathan Award for Comedy Romance. Her novels have been translated into several languages and she has also contributed two titles (one ghostwritten for GMTV’s Fiona Phillips) to the UK’s Quick Reads Campaign, which provides easy-to-read books for adult emergent readers. Lynne’s ghostwriting career began in ...
More about Lynne Barrett-Lee