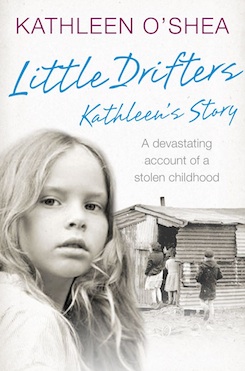 Bonded by love, broken apart by life then betrayed by those trusted to care for them.

Little Drifters is a book about how your greatest strength can also become your greatest weakness. Kathleen and her brothers and sisters had always survived by relying on one another, taking care of each other in times of hardship and looking out for one another when it seemed the world was against them. A large travelling Irish family Kathleen’s early life on the road was physically challenging, but fun and full of love. Then when her parents proved unable to cope she turned to her siblings for warmth and support as their family disintegrated around them. When their father suffered a total breakdown they were literally fending for themselves, eating out of bins and helping each other to stay strong and survive from one day to the next in a dreadful state of neglect.

But this love and care for one another turned out to be their greatest downfall once they became wards of the state in the cruel and brutal world of the convent. In this cold and heartless place, their love was used against them as a weapon of torture. If one stepped out of line, another would be punished. To make them do as they were told, the nuns would threaten their younger siblings, beat them or threaten to take them away. It was Kathleen’s love for her sister Tara that ultimately led to the pair being separated and Tara being sent to the even more barbaric Magdalene laundries. Kathleen will forever be haunted by the knowledge that it was her own love that caused Tara years of solitary suffering.

In the convents Kathleen and her siblings had to find a new way to survive, a way to endure the endless ‘gypsy’ taunts and to fight back without endangering one another.

Though scarred forever by their experiences, Kathleen and many of her siblings survived the horrors of rape, beatings, torture, abuse and slavery suffered in the convents. And since being reunited as adults, have found strength once more in being close to one another. But not all of them made it.

This is the story of how one little girl held onto love and her dream of being a family again one day, despite everything that life could throw at her.

Born in the wilds of southern Ireland, Kathleen spent her early years roaming free in wagons with her large family. Her idyllic country life however was brought to end when her parents’ marriage fell apart and aged eight she was sent to live in one of the notoriously cruel convents of Ireland. It wasn’t until seven years later that she was finally freed and moved to London, where she has remained for the rest of her life. In 2002 she was awarded compensation under the Residential Institutions Redress Act for the abuse she suffered in the convent. Her memoir Little Drifters recal...
More about Kathleen O'Shea,