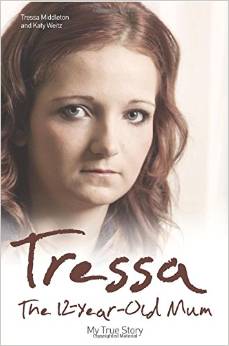 Nobody knew the truth. For all those years while people judged me, I protected those closest to me. I tried to save my family. Now it’s time for the real story to be told. It’s time for healing and forgiveness.’

Tressa made UK history when she became Britain’s youngest mum in 2006 aged just 12 years and 8 months.

At the time Tressa claimed the father had been a local boy but the truth was far more sinister.

Tressa's older brother Jason Middleton had been abusing her from the age of seven. He had warned her that if she ever told anyone all her five siblings would be taken into care and it would destroy their mother Tracey.

To stop the family falling apart she had kept his terrible, dark secret. But she couldn't cope and when her baby girl Toni was taken into care, she finally told the police.

In 2009 Jason was found guilty of rape at the High Court in Glasgow and sentenced to four years in prison. Tressa's life fell apart and for a year she was a heroin addict and a lost soul. With the help and love of fiancé Darren, she found her strength once more and together they got clean.

Closure finally came when her mother died of pneumonia in July 2012 and she met herbrother Jason again at the funeral. For the first time she realized she didn’t hate either of them – she had forgiven.

Tressa's journey is a poignant, heartbreaking and yet ultimately uplifting story - one of a little girl who grew up in darkness but found her way towards the light.

Tressa Middleton attracted huge press coverage aged 12 when she became Britain’s youngest mum - but the real story behind the headlines was far more complicated and heartbreaking. Tressa was the third child of four born to an absent father and an alcoholic mother who were regularly taken into care. Tressa was more like a mum to her youngest sister and later to her mother’s two young sons by other men. The abuse by her older brother began when she was seven but he used the family’s instability against her. He said that if she ever told, all the children would be take...
More about Tressa Middleton