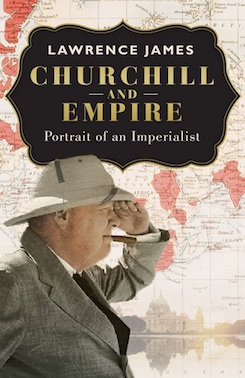 This book is a reinterpretation of Churchill’s life and achievements seen through the perspective of his lifelong love affair with the British Empire. He emerges as a statesmen convinced that the Empire is a unique for force for good and the spread of civilization and that the fulfillment of what he called Britain’s imperial ‘mission’ was the touchstone for government’s policies in peace and war.

I have shown how imperial considerations dictated his decisions throughout his career. Placed in the imperial context it made good sense to force the Straits in 1915 and overthrow the Ottoman Sultan whose jihad threatened the stability of the Allied empires in Asia, the Middle East and North Africa. Likewise, Churchill’s grand strategy in the Mediterranean and Middle East was designed to defend imperial interests and, after 1942 to consolidate Britain’s regional power.

All this is controversial, as are my conclusions about Churchill and Irish policy, his involvement in the Russia intervention of 1919-1921 and his grand design for the re-ordering of the Middle East which did so much to lay the foundations of the present day imbroglio. Churchill was a dominant figure in the first phases of what has become the ‘war of the Ottoman succession’.

Churchill’s Empire was humane and benevolent, but as a minister he was driven by expediency to abandon his moral compass. In South Africa, Iraq and in Kenya in the 1950s Churchill allowed the Empire to be compromised by harsh subordinates.Yet, in his persistent and fiery opposition to Indian independence, Churchill was prepared to squash the Congress movement, which he detested. Six years after Indian independence, he said that he would have been willing to fight to keep India. There were many contradictions in his opinions about the empire.

I have treated both world wars as imperial conflicts. In the Second, Churchill was guided by the vision of the United States, first as the partner in the imperial war effort, and once it was clear that the Allies would win, as a postwar collaborator. The USA and the British Empire would together created a fairer, better world. The Prime Minister was naïve in the extreme; Roosevelt wanted a new world free of empires and American policymakers, generals and businessmen were laying the foundations for that world. The ‘special relationship’ in which had so much simple faith was, I have argued, a Faustian pact. After 1945 this became, increasingly apparent. As Prime Minister between 1951 and 1955, he found himself unable to win American backing for Britain in the Middle East. The relationship was now that of master and servant, yet Churchill clung tenaciously to his faith in American altruism and goodwill. He had become the jilted lover.

As Churchill had feared during the war, victory would mark the beginning of the end for what he fervently believed was an Empire that offered hope for mankind.

I have relied considerably on the records of the intelligence services, as Churchill did. These and other sources had provided much new and sometimes astonishing material on the 1914 Irish crisis,the war of intervention in Russia, Anglo-Italian and Anglo-Japanese imperial rivalries in the 1930s, the fall of Singapore and Burma, King George VI’s views on Australians, Anglo-American wartime tensions, British biological and chemical warfare research, and plans for an atomic offensive against China in 1954.

Throughout, I have been sympathetic towards Churchill: his imperial vision was, in essence, decent and humane, but, when exasperated or crossed, he did show a vindictive fury against some of the Empire’s subjects who did not recognise what he thought was for their good.

Lawrence James was a founder member of York University and then took a research degree at Merton College, Oxford. After a distinguished teaching career he became a full-time writer in 1985 and has emerged as one of the outstanding narrative historians of his generation. His books include Crimea: The War with Russia in Contemporary Photographs, The Savage Wars: British Campaigns in Africa 1870-1920, Mutiny: Mutinies in British and Commonwealth Forces 1797-1956 and Imperial Rearguard: The Last Wars of Empire.Lawrence James edited the Daily Telegraph British Empire supplement (1997) and was th...
More about Lawrence James