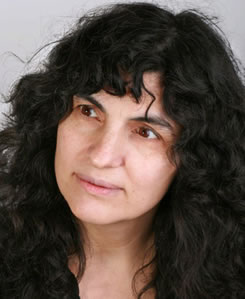 After taking an undergraduate degree in pure mathematics at Harvard University, Leila Schneps moved to France definitively in 1983, where shortly after obtaining her Ph.D., she was hired by the French National Scienctific Research Centre as a researcher in mathematics. Over twenty years of doing maths, teaching, and mentoring graduate students, her interests have widened far beyond the horizons of pure algebra to aspects of mathematics - such as probability and statistics- that play a more visible role in the world around us, and to the way in which people absorb, reject or react to mathematics.

At the same time, a lifelong passion for mystery stories led Leila to try her hand at writing one herself, eventually leading to a series of "Cambridge Mysteries" published by Allison & Busby (The Three-Body Problem, Flowers Stained with Moonlight, The Library Paradox, The Riddle of the River), under the pseudonym of Catherine Shaw. The books take place in and around the legendary mathematics department of Cambridge University in the late 19th century, and each book is built around a true mathematical problem that concerned the greatest minds in the intellectual circles of the time. Classical "cozies", the books were also Leila's first attempt at communicating the beauty of mathematics, and a vision of the passion it can engender, to the general public.

Leila's first audience consisted of her four children, who grew up "friends with maths" and provided her with endless stimulation, ideas and sources of interesting observation. She lives in Paris, but her mathematical research takes her all over the world.

A friend and I were emailing about our respective book manuscripts and how to look for agents, and he told me about Andrew Lownie's site, particularly mentioning that fact that Andrew had quizzed 34 commissioning editors on what they were looking out for in the year ahead. Together with my daughter and co-author Coralie, we had a look at the site, and then couldn't get away from it because it was so lively and humorous. After reading through all the pages and laughing out loud, we decided to break the rule we had set ourselves to send our manuscript only to agents who had represented similar books, and make Andrew Lownie our best hope. We crossed our fingers, and our optimism was rewarded!