Crown of Thistles: The fatal inheritance of Mary Queen of Scots
Linda Porter 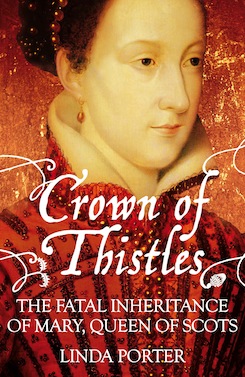 The rivalry between the Tudors and the Stewarts was crucial to the history of Britain in the sixteenth century. It shaped a successful nation that would grow from the ashes of centuries of border warfare, intense suspicion between the two competing monarchies and the ever-present threat that interference from the great European powers might turn the entire island into a client state of either France or Spain. Yet the struggle between the fertile Stewarts and the barren Tudors is generally only seen in terms of the relationship between Elizabeth I and her cousin, Mary Queen of Scots.

In fact, the power struggle between England and Scotland was both ancient and intractable. The strong personalities of the Tudor and Stewart monarchs who preceded Mary and Elizabeth (James IV and Henry VII, James V and Henry VIII) and their quarrelsome nobility influenced the character of this prolonged and far-reaching dispute. We still have a surprisingly limited view of Tudor history and especially of the reigns of Henry VIII and Elizabeth I. Scotland was a constant thorn in their sides. Domestic security, international prestige, financial cost and, above all, personal animosity brought about relentless tension in the British Isles.

The first Tudor, Henry VII, no doubt hoped to avoid all this and bring about stability when he married his daughter, Margaret, to James IV of Scotland in 1503. But he must also have appreciated the possibility that Margaret’s descendants might seek to rule the entire island if his male heirs died out. This became the acknowledged ambition of Mary Queen of Scots, Margaret’s granddaughter, and a major factor in her downfall.

This is the story of a house divided, of flamboyant kings and queens, cultured courts and tribal hatreds, blood feuds, rape and sexual licence on a breathtaking scale, violent deaths and disastrous battles. Some of the most colourful personalities in British history are here: James IV and James V, who each had seven illegitimate children, the canny but insecure Henry VII, his tenacious and much-maligned daughter, Margaret. Also revealed is a little-known side of Henry VIII, best remembered for his six wives. He tried to dominate Scotland but did not succeed. And the international dimension of what is often still viewed as a domestic dispute was of great importance. The influence of France in Scotland, and its enmity towards England, was of long-standing. What came to a head between Elizabeth I and Mary Queen of Scots had been many years in the making.

Crown of Thistles will shed new light on Henry VIII, Elizabeth I and Mary Queen of Scots. It brings alive a neglected aspect of British history – the blood-spattered steps of two great families ruling an island on the fringes of Europe towards an awkward unity that would forge a great nation. For when James VI of Scotland and I of England crossed the border to claim the English throne in 1603 it seemed that the Stewarts had won. But his great-grandmother had been a Tudor.