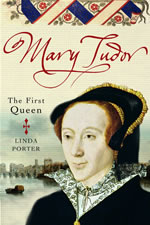 Mary Tudor, the most recent life of Mary I (Mary Tudor), the eldest of Henry VIII’s three children

The terrible epithet, “Bloody Mary” is all that remains in the popular mind of the first woman to rule England in her own right. The judgement of history has been so relentlessly harsh on this gentle, devout woman that her life has been all but obliterated from national memory. The real Mary, who longed to be loved and to do what was right, deserves better.

This is a personal history of Mary, set in the violent and colourful context of mid-Tudor England. It is a compelling story with disturbing echoes for our own times; parental abuse, sibling rivalry, a disastrous marriage, all figure prominently in Mary’s life. And the religious terrorism that is Mary’s best-known legacy would be perfectly comprehensible to 21st century extremists.

Mary was a touchingly feminine woman in a man’s world. Her love of the latest French fashions and jewelry, the fears of an old maid about to be married to a handsome Spanish prince, her seething jealousy of her younger, more attractive sister Elizabeth, add the human dimension to her sad life. And her vision of a Catholic England restored to its rightful place at the heart of Europe was a noble one. She bequeathed to the sister she so detested a realm that she did not understand, but which, in her courage and determination, she had worked hard to rule and to make a better place.