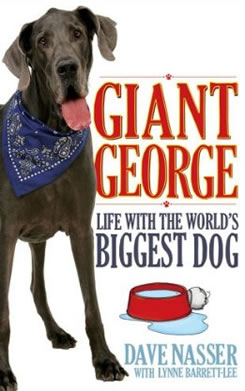 ‘In one year our ‘baby’ had grown from a tiny trembling ball to being so big that he needed his own queen sized bed. They say size isn’t everything, but they’re wrong. When one hundred and fifty pounds of dog gets a twinkle in his eye, size matters. Boy, does size matter!’

In 2006, Dave and Christie Nasser bought a Great Dane puppy. The runt of his litter, he’d won their affection with his soulful expression and brilliant blue eyes. They named him George and he soon began to dominate their world, growing steadily from quivering misfit into gentle giant. For Dave and Christie’s ‘baby’ – now five feet tall and over seven feet long – is still every inch a big softie; eager to play and boisterous to the point of causing chaos, he’s still scared of water, scared of dogs a fraction of his size, and most of all, scared of being alone.

In 2010, George became a doggie superstar. Having being crowned by Guinness as the Tallest Dog in the World, Ever, he’s appeared on Oprah and has his own global fanclub.

But, to Dave and Christie, this extraordinary animal is still their much-cherished pet. One who’s seen them through dark times, as they struggled to start a family, who’s made them laugh, made them cry, and continues to make them happy.

Giant George is their heart-warming story.