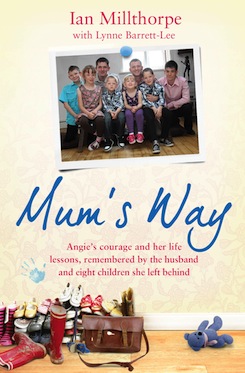 It was a weekday and we were getting the younger kids ready for school – always  something of a military  operation in our house. I went into the living room to find Angie plaiting our daughter Jade’s hair in front of the mirror; something she did every morning.

‘Mill, stand here,’ she said. ‘Just stand beside me and watch how I do this.’

She must have noticed my expression because she smiled at me then. ‘It’s easy when you know how,’ she reassured me. ‘Honestly.’

I watched her. Watched the way her hands twisted  the hair so cleverly. ‘I’ll never be able to do that,’ I said.

‘Yes, you will,’ Angie said quietly. ‘Because I’m going to teach you.’

So began the first lesson Angie Millthorpe taught her husband, Ian. It would be the first of many lessons,  taught over a period of several months. They were the skills he had to master if he was to fulfil Angie’s wish that he could care for their eight children as well as she always had when she wasn’t there to do it any more.

That the day was coming when he would have to  was no longer in any doubt. In 2007, Angie – who’d  already survived breast cancer in the early nineties – developed an irritating cough. Never a smoker, she refused to worry, and reassured Ian she was fine. But when it refused to go away, and  she became breathless as well, she reluctantly agreed to visit the doctor.  She was immediately referred to the hospital, and sent for a scan, and the result was as grim as it was shocking.  If they were stunned to be told that Angie had a shadow on her lung, they were even more stunned to discover that this wasn’t a chest infection or  pneumonia. It  was actually, the consultant told them,  the return of the breast cancer she had had – and thought she had recovered from – back in 1993. It seemed the disease that had caused nothing bigger than a pea-sized lump in Angie’s breast had returned to tear their world apart again.

Childhood sweethearts, Ian and Angie had always known they were meant for each other. And

they knew something else, too - that they’d have a large family. Angie adored kids and, on leaving school, trained as a nursery teacher, where she found great joy in looking after little ones. And  as one of eight  children himself, Ian  (who by now had become a miner, like his father) was only too happy to agree to Angie’s wish to have as many of their own as they could. After their marriage in 1985, they had their first son, Ryan, quickly followed by Damon  and then Reece.

But then the  breast cancer struck and the couple had to accept the possibility that they might not be able to have any more. Five years on, though, with Angie well again, they did. In 1999, she gave birth to a fourth son, Connor,  followed by twins Jade and Jake in 2002. Fate was to test them again in 2004, when Ian had a serious brain haemorrhage, but once he’d recovered, the family got back on with their lives, confident they’d had their share of bad luck.

But it seemed they hadn’t. Three years -  as well as two more children - later the family’s

luck had changed again. And, with the reason behind Angie’s cough now clear, the family  began a second cancer battle. Only this time it was one in which they already knew the outcome.  Angie wouldn’t live to see her children grow up.

Raising eight children would be a big job for any couple; to raise them alone, without their mother, an almost Herculean feat. But this was exactly what Angie wanted Ian to be able to do. To raise them well, to raise them happy, to be both dad to them and mummy. So in the last months of her life, Angie – a born mother – both compiled a list of ‘rules’ to guide Ian in the future, and also put him on an intensive training course, so he could learn all the practical skills he would need.  She taught him how to cook for them,  to bake for them, how to make her special chicken curry. How to iron, how to shop for groceries, how to make their beds the way they liked them, how  to soothe away their hurts, pack their lunchboxes with all their favourites, how do do all the little things she’d always done for them so unthinkingly, so they could continue to feel her love and presence in their lives.  And  Ian knew he wasn’t just  doing this for the children, either. He was doing it so his beloved wife could be comforted by knowing that he had the tools to bring their children up her way.

Finally, inevitably,  came the hardest task of all.  Angie, the job done, had to find the courage to let them go, and Ian and the children the courage to carry on without her.

Both a memoir that celebrates an irreplaceable wife and mother, and a moving example of the healing power of love,  Mum's Way is the story of two ordinary people forced to make an extraordinary journey. 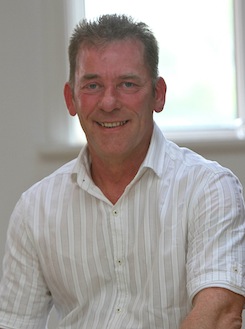 Ian Millthorpe was born and raised in the mining community of Grimethorpe, near Barnsley, in south Yorkshire, the youngest of eight children . After leaving school in 1978 he started work as a coal miner, like his father.  In March 2004, after 26 years as a miner, he had to retire through ill health, due to a brain hemorrhage and the diagnosis of chronic obstructive pulmonary disease.Since his wife Angie’s death in October 2010 he has been a full time dad and mum to the six of their eight children who still live at home with him in Grimethorpe.
More about Ian Millthorpe