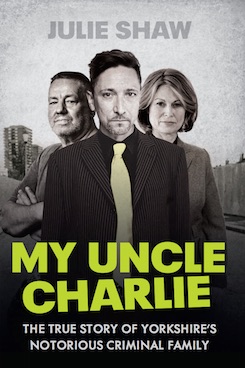 The 8th April 1919 was a defining day in history for Bradford. When millions of  young men had been called up to serve their country during the first world war, women had stepped up to fill the employment gaps they’d left, and, in doing so, had kept the city on its feet.  But the war was now over, and the demobbed soldiers needed their jobs back, so this day would be the last when women conductresses would be punching holes in tickets on Bradford’s Corporation trams.

For 18 year old Annie McArdle it was a defining day as well. She and her beau had weathered the first world war too, but their own personal battles were about to begin. For today was the day she walked up the aisle of St Joseph’s church and agreed to love, honour and obey Reginald Harold Hudson.

Charlie, their second boy, was born in 1923, on the overcrowded Broomfield Estate, a younger brother to their infant daughter, Margaret.   Though not their first son, he almost immediately became their eldest, their first born boy Frank having already tragically died from choking, while still only a toddler. The Hudsons would eventually go on to have a further nine children – seven more boys and two more girls –  all of whom were brought up into a family who were just scraping a living, and who would beg, steal or borrow  anything to try and make ends meet.

Though his brothers and sisters were afraid of him, Charlie was known a soft touch with the ladies. With his James Cagney demeanour and his Clarke Gable haircut, he was considered quite a catch round the estate, and at a time when most of the men were away fighting for King and country, he had the pick of the local  ladies to choose from.

He settled on Peggy, and in 1947,  when he was 24, they married, and quickly had a boy and a girl. But it didn’t last,  mostly due to Charlie’s drinking and womanising, and in 1950 Peggy ran away to Nottingham. He was never to see her or the children again.

The loss of his young family meant little to Charlie. By now busy (and making good money) running gambling houses as well as prostitutes, he had little interest in family life or kids. But the hard man was about to find out that he wasn’t as invulnerable as he’d previously thought, and it wasn’t long after Peggy left than he fell in love. Betty was everything most of the local women weren’t – soft and loving; a real gangster’s moll. She was pretty and deeply feminine and Charlie really loved her; in Betty he had found his soul mate and his princess. And when she gave him a beautiful  baby daughter, Elizabeth, it seemed his life couldn’t get any better.

But it could get worse. Driving family home from a Christmas party, after having one too many, Charlie crashed his car off St Enoch’s bridge, in Bradford, and of the six passengers crammed in with him that night, four would pay dearly for his mistake. His beloved Betty, their baby Elizabeth, brother Brian and his friend Gilbert - all of them lost their lives that night. And from that day on, everything changed. It would turn out to be the defining event in Charlie’s life; one that would set him on a path to destruction…