‘Toto, I have a feeling we’re not in Kansas any more.’

Dorothy, the Wizard of Oz.

“The noise was like no other noise I’d ever heard before.  Reminiscent of a speeding freight train, but a million times more so, as things started dancing high over our heads. Things were moving above us that had no business moving. The screech of metal, wood and debris, all wrenched from their moorings. God alone knew what was going on up there.

I could make out Molly’s head, a calming presence in my mother’s lap.   I looked over at Rick then, and he looked at me. ‘If you want to stay alive,’ he shouted, ‘start praying’…”

So began the end of life as Matt Deighton knew it, as a huge Tornado ripped through the small town of Greensburg, Kansas, killing eleven people, injuring sixty and destroying 95% of the town.

It was to be a defining moment in Matt’s life. He’d returned to Kansas three years earlier in a difficult emotional place. His long-term relationship had ended, his restaurant had gone under and though he’d returned to his hometown ostensibly to support his ageing parents, he also knew it was to try and heal himself. Aged 41, he had nothing to bring back with him but his pet Dalmation, Molly; a dog he’d bought as a pup and who he almost left behind in Texas, believing that as he was now at rock bottom she might just be better off somewhere else.

By the time the tornado razed their home to the ground, Matt’s father had  already passed away, and, with his mum suffering from dementia, life was hard. But it was about to get harder; the killer twister destroyed everything in its path, and when Matt emerged from the concrete basement of his neighbour’s home he was back where he started, with just four things to call his own: The clothes on his back, his mum, his faith in God and, of course, Molly.

Under the Rainbow is an intensely personal story, one not so much about a man and his dog, but about a dog – a very special dog – and how she helped a man, through helping others, find new meaning in his life. From the desperate early days following the aftermath of the tornado, the book charts that transformation of both a community and a life; the rebuilding of a town many thought wasn’t worth re-building – almost all of it by volunteers -  and, in doing so, along with Molly, of Matt’s human journey, inspired by both her love and her example. It would be a process that would take him all over the US and beyond, and back to a place where he’d never felt richer. Home. 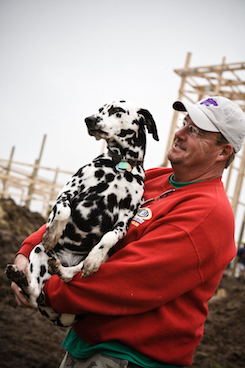 Matt Deighton is an entrepreneur whose ventures have included a popular Texas restaurant and, more recently,  the manufacture of a boutique condiment called Duck Salt, which he markets direct to fundraising groups across the USA. After his home was destroyed in the Greensburg, Kansas EF5 tornado in May of 2007, he began work as the official Volunteer Coordinator during the clean up and rebuilding, directing the efforts of some 14,000 volunteers who flocked to Greensburg to help. Over the past seven years he and his Dalmation, Molly, (who’d become an iconic Greensburg resident) co...
More about Matt Deighton