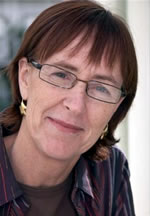 Marguerite van Geldermalsen’s parents were from the Netherlands but she was born in New Zealand where she grew up on an orchard not far from Nelson. She graduated as a Registered Nurse in 1976.

She married Mohammad Abdallah two years later, living with him in a cave in Petra. She ran a small clinic for the local people while Mohammad sold souvenirs. A project to remove inhabitants from the site culminated in their move to a red brick settlement in 1985 where she settled into village life and their children went to school.

Mohammad’s health deteriorated and he died at the age of 50. Her children are grown and over the last couple of years she has had time to reminisce and work on the story of her unexpected life.

I was living in Sydney when a London publisher became interested in my memoir. My contact in the UK said I would now need an agent on the spot and put me in touch with Andrew Lownie and I soon realised how lucky I was to have Andrew there so I didn’t need to think about all the contractual and financial work that is involved in the publication of a book. I was then able to concentrate on the writing and am now free to enjoy the feed-back.