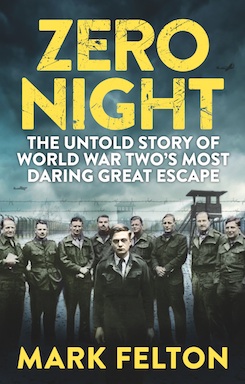 On the night of 30 August 1942, “Zero Night” as the escapers called it, almost 50 British officers staged the boldest and riskiest mass escape from a German prisoner-of-war camp during World War II. It was the first ‘great escape’ and instead of tunnelling, the British boldly went over the huge perimeter fences.

‘Operation Olympia’ would see a mass escape led by a small group of tremendously brave and resourceful young army, navy and RAF officers. The prisoners at Oflag VI B Warburg, Germany’s largest officers camp, set in motion what fellow prisoner and fighter ace Douglas Bader called ‘the most brilliant escape conception of this war.’

Working in secret, they created a complex and daring plan, manufactured civilian clothing and designed and built huge wooden scaling contraptions. After weeks of secret training, four teams of officers charged the camp’s double perimeter fences armed with the ingenious climbing contraptions and set about launching the boldest escape the Germans had yet seen.

Backed by a carefully planned deception campaign involving another fifty prisoners, months of meticulous planning hung in the balance during three minutes of mayhem and confusion. The prisoners managed to scramble over the extensive barbed wire fences and ran off into the darkness pursued by German bullets. Some stayed gone for over ten days, having extraordinary adventures before being recaptured, while three made a ‘home run’ to England, the same number as in the more famous ‘Great Escape’ in 1944.

Zero Night tells the incredible and forgotten story of the ‘first great escape’.

A tense and dramatic story that builds up to the climactic mass escape and evasion that is guaranteed to enthrall and entertain readers.