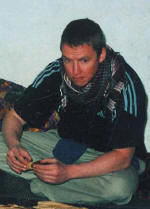 Mark Nicol was educated at Belmont Abbey in the SAS’ home town of Hereford. His father, a Lieutenant Colonel, served in the SAS between 1970 and 1988 and was awarded the MBE. Mark, 31, worked on regional newspapers after graduating from Reading University with a degree in Politics and International Relations. He was then a reporter for the Evening Standard, Sunday Mirror and the News of the World before writing Ultimate Risk, SAS Contact Al Qaeda the story of the biggest and most destructive battle of the SAS’ history. Ultimate Risk, set in Afghanistan in November 2001, was serialised over two days by The Sun and published by Macmillan in October

How I found the Andrew Lownie Literary Agency? Well, in fact Andrew was recommended to me in late 2003 by my editor at Macmillan, Georgina Morley. I have been with him ever since.