Playing the Game? : The Ethics of Cricket from Bodyline to the Present.
Mark Peel 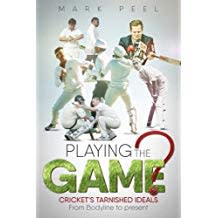 Of all games, cricket has prided itself on its ethical traditions, but to modern sceptics such as Michael Atherton, the former England captain turned journalist, the idea of cricket embodying a higher morality is something of a myth. This book looks at how the ethics of cricket have changed from the infamous Bodyline series between Australia and England in 1932-33 to the present, noting that those ethics depended as much on the conventions of the game as the laws. This worked for the most part when those conventions commanded near-universal assent - Bodyline was a temporary aberration – but the onset of new social and political forces in the 1960s and 70s put paid to that. In a more professional era when winning was everything, gamesmanship bordering on cheating became prevalent, and with the authority of the umpire increasingly undermined, the game entered something of a moral vacuum. Sledging- verbal abuse of the batsman to upset his concentration- became associated with the Australian team of the 1970s, intimidatory fast bowling with the West Indian one of the 1980s and ball tampering with the Pakistan one of the 1990s.

It was to reclaim the game’s ethos that MCC adopted the ‘Spirit of Cricket’ as a preamble to the laws of the game in 2000, but the elusive definition of that ethos remains its central weakness. To add insult to injury, disciplinary measures by the game’s governing body, the International Cricket Conference, were thwarted on several occasions by wider political forces, such as the Indian Board’s threat to cancel their tours of South Africa in 2001 and Australia in 2008 respectively unless disciplinary charges against their players were dropped, and the ousting of Darrell Hair from the international elite panel of umpires following his ruling in the Oval Test of 2006 that Pakistan had been guilty of ball tampering.

The introduction of the Decision Review System- a technology based system to assist the umpires in their decision-making- in 2009 has helped remove some of the histrionic appealing and dissent towards the umpire, but while captains such as New Zealand’s Brendon McCullum and Pakistan’s Misbah-ul-Haq have opted to play the game in a more positive spirit, the majority remain to be convinced.