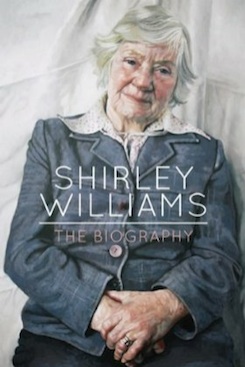 Shirley Williams, the former Labour minister, and co-founder of the SDP, is one of Britain's most influential politicians, greatly admired for her warmth and resilience, but in this first ever biography of her, Mark Peel reveals the more vulnerable figure behind the upbeat facade.

With full access to Shirley Williams and her friends and her family, and drawing on the vast faamily archive of letters and diaries, Peel charts a life absorbed in politics often at the expense of personal fulfilment. He looks at Shirley Williams' troubled relationship in adolescence with her mother, Vera Brittain, the celebrated writer, over the latter's apparent neglect of her family as she pursued her literary ambitions. He goes on to to explain how Shirley Williams, later faced a similar conundrum in balancing a career of public service with her marriage to Bernard Williams, a conundrum that ended in divorce, the single most traumatic event in her life, exacerbated by her strong Catholic faith.

From Oxford days, Shirley Williams was touted for high office with many predicting that she would become Britain's first prime minister. The description, while understandable given her prowess as a speaker and campaigner, was essentially flawed because it failed to consider her less obvious defects, most notably her indecisiveness, her lack of collegiality and her lack of understanding for the processes of government.Private correspondence shows the numerous occasions she threatened to resign from government and the pained esponse of the then prime minister, Harold Wilson.

A substantial part of the book charts Shirley Williams' courageous stand in favour of entry to the EEC and opposition to left-wing extremism and her major part in the formation of the SDP. Although the Gang of 4  were portrayed as willing and equal partners in a new enterprise,  private correspondence underlines the tensions within the group, not least Shirley Williams' failure to support Roy Jenkins for the leadership in 1982, and her resentment of David Owen's treatment of her duringf his leadership 1983-87, a snub which exacerbated their clash over the SDP's merger with the Liberals.

The book concludes by paying ample testimony to Shirley Williams' many qualities, but questions the extent of her legacy in terms of pratical achievement.