The Secret Ministry of Ag. & Fish is Noreen Riol's memoir of her life in SOE. It recounts: her meetings with agents  infiltrated into Occupied France; the anguish felt in "F" (for France)  Section when one of the "moonlight squadron",  an élite goup of highly-trained pilots, sent behind the lines to rescue a wounded or hunted agent, is shot down;  the feelings when  radio contact with an agent ceased, or an agent disappeared without trace, and they knew he or she would not return and the elation felt when a captured agent, sentenced to death, escaped at the 11th hour .

She tells: of agent's  reactions during debriefing, some  almost unable to recount their horrifying experiences, others cool and collected;  of the mysterious broadcast "messages personnels" announcing  "drops" of agents, arms, food, etc. which so mystified the enemy  and of her time in Beaulieu "the finishing school for secret agents" where she acted as a decoy to discover whether an agent confronted by a pretty face and a moonlit evening, would "talk" .

The book contains many personal stories of the agents she met, incidents and conversations both amusing and poignant and which  have not been revealed before such as the antagonism between General de Gaulle's rival organisation, the BCRA and SOE, and the tensions between de Gaulle and Churchill .

Since the secret SOE files were opened to the public in 2,000,  as the only woman survivor of "F" Section in France,  she is often asked  to speak, in England and France, about her life as a member of Churchill's Secret Army, and the unsung heros and heroines she knew, almost half of whom did not return. 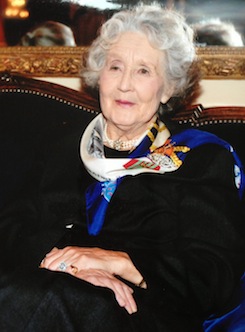 Noreen Riols was born in Malta where her father was serving in the Royal Navy, and educated at the French Lycée in London.  From 1943-45 she served in SOE (Churchill's Secret Army) and post-war worked for the World Service of the BBC where she met her journalist husband, recently demobilised from the 1st French Army.  After 6 months behind the Iron Curtain in Bucharest in the early fifties, they settled in Versailles where their five children were raised. For nine years she worked freelance from Paris for "Woman's Hour" while writing for many newspapers and magazines a...
More about Noreen Riols