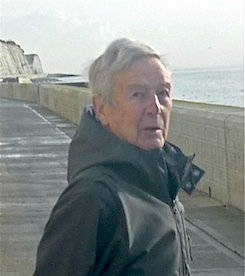 For my fifth and final career, after being a dashing WW2 soldier, portwine grower and shipper, advertising CEO of a New York agency and a dozen directorships in second-rate public companies, my wife and I harboured near Gascony whilst our two daughters were educated. The wine I grew was awful, the truffles superb and there were scores of orchids growing in the courtyard. My family were belligerent Huguenots, from Gascony of course, and I traced their activities including espionage from 1497. My first book was `The French Connection', which sold out. A working holiday in Burgundy produced a series of 15 travel books, 6 with Rosters, 9 with Collins.

Ambition took over. I was determined to write `biographies' of five of my heroes, but army fashion, attacking on the flanks. Samuel Pepys' wife was a beautiful Huguenot; Nelson's wife, not his squalid mistress, was an attractive, interesting widow from the Caribbean sugar plantations (truly); Wellington's amorous life was astonishing (not all carnal). All marvellous stories, all duly published. But Churchill and then Hitler were chronological vignettes, in anecdotal style, very easy to read, and were both published in Russian. My army division was the famous 11th Armoured with Black Bull insignia, and my book about them was so successful that 16 other Second World War books followed, some of which have been re-published several times.