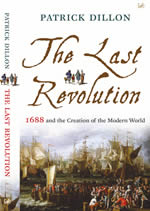 The Last Revolution of 1688 saw some of the most dramatic events in British history: William of Orange’s invasion with a force four times the size of the Armada; the psychological collapse of the King, James II, his ignominious flight and capture by fishermen; his second escape, stealing away from London by river while a Dutch army marched in through St James’s Park.

It was also one of the most important. 1688 closed the book on seventy years of Civil War and political crisis. Ahead lay a new future for England as trading and maritime colossus, imperial superpower. Ahead, too, lay a new type of politics, with the monarch’s powers curtailed and the rights of parliament established. Englishmen of the following two centuries would date the start of English liberty from 1688.

But these were not the Revolution’s only achievements. It took place against a background of extraordinary social and intellectual ferment. Isaac Newton published his Principia Mathematica in 1687, John Locke his Essay on Human Understanding the year he returned from exile in Holland. The Revolution brought religious toleration. It established the Bank of England, public credit, freedom of the press. England’s first stockmarket bubble convulsed the City, a consumer boom filled London’s streets with adverts and display windows. New clothes and wigs, silks and porcelain from the emerging East all transformed fashions in a craze for the ‘Modern’. From the Revolution of 1688, which encouraged these new developments, emerged a world quite different from any that had existed before: a world based on commercial growth, not land ownership, expanding science rather than religious repression, political freedom rather than autocracy – the world we live in today.

The Last Revolution places the dramatic political and personal story of 1688 in this context, and relates it through the men and women who created it: exiled radicals, and worried traditionalists, scientists and City financiers, journalists, gamblers, actors and entrepreneurs. It tells the story of Henry Purcell, busily creating a new English music, of Huguenot exiles from Louis XIV’s France, of the first feminists who sought freedom inside marriage as well as freedom within the state.

Based on detailed archive research, The Last Revolution will inhabit England in the decade around 1688. It will find the links between a political revolution and the dramatic changes which accompanied it, and so track the birth of a new world.