The Story of Britain
Patrick Dillon 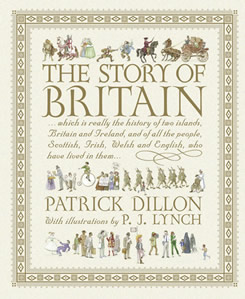 No one has filled the gap left by H E Marshall’s Our Island Story. Young people’s appetite for history is demonstrated by the success of the Horrible Histories, Lady Grace Mysteries, and Flavia Gemina. The reprint of HE Marshall has entered bestseller lists. But no one has yet produced the single-volume classic to replace it, a modern narrative history which enthralls young readers and satisfies their parents.

Stories grip young people. Through stories they retain not only historical detail, but an overall sense of historical progression. Stories give them characters they can associate with different eras, and points of view through which they can imagine what it would really have been like to live through the plague or the blitz. And British History is the greatest treasure chest of stories we have. From the Norman Conquest to the discovery of DNA, from Henry VIII to highwaymen, slavers to soldiers, history offers tales to excite young readers and to ask them questions, to frighten them and to make them laugh.

Numerous single volume histories of Britain have been produced. But while many have been bought for children, few have been written for them and none have presented narrative history with the quality of story-telling and writing which young readers have come to expect. Our Story will immerse readers in Court and slum, take them backstage at the Globe and into Isaac Newton’s rooms in Cambridge. It will tell stories – some linked, some stand-alone – both of poor and rich, Kings and street-children.

Pitched at 10-15 year-olds, it will not only hand down the ‘stories our fathers told’. It will drag young readers into a past which has dark as well as light aspects, a past in which they can imagine what their own reactions would have been, face the dilemmas that challenged their ancestors and relive all the triumphs and shadows, the hopes and fears of British History.

Children read many different kinds of books. History offers many different kinds of experience. A single template applied to fifteen hundred years soon becomes wearisome, whether it results in relentless patriotic fervour, or relentless punning humour. The tales in Our Story will be neither pompous nor patronizing. They will both make young people laugh, and thrill them with the excitement of cavalry charge or air-raid. They will take young readers vividly back into the past and make them realize that history is not only something that takes place in schools – it really happened.