The Story of Buildings
Patrick Dillon 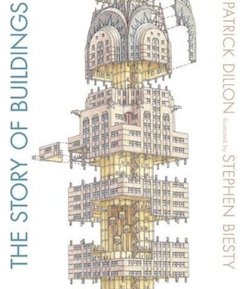 Buildings are so familiar that we often fail to look at them. We live in buildings, go to school in them, shop in them and walk through towns full of them. But every building has a story to tell – the story of an architect, a businessman, or a new idea. Through Patrick Dillon’s narrative and Stephen Biesty’s drawings, The Story of Buildings will unlock that tale, showing readers their homes, schools and cities as they have never seen them before.

The first section will use our homes to answer some basic questions about buildings. Why did we first start building houses? To keep out rain and sun, heat and cold. How did we first make them? By cutting stone from mountains, or trees for wood, by baking clay into bricks, or stretching animal hides over frames. We clustered into towns for protection or trade, and buildings became taller, like the structures of the Anasazi Native Americans, or the insulae of ancient Rome. Trade changed how buildings were paid for. After the Great Fire of London, Nicholas Barbon invented the terraced house so he could build houses faster and more profitably. And technology changed our homes too, as concrete and steel made stronger, taller buildings, and the invention of the elevator let us reach high up into the sky.

People didn’t only build houses, of course. They built palaces and temples, theatres and law courts, and used them not just to serve a purpose, but to display their wealth and culture. Having studied how buildings are made, and why, The Story of Buildings will go on to narrate a history of architecture through the stories of some of the world’s grandest designs.

The Emperor Vespasian built the Colosseum to win support from the Roman people. He built it over the ruined palace of his hated predecessor, Nero, and 50,000 people could watch circus shows there. Maurice de Sully, Bishop of Paris, saw a glorious new cathedral in a dream, and founded Nôtre Dame on an island in the city. Walter Chrysler wanted his company to have an office as modern and beautiful as his cars. He built the Chrysler Building as a skyscraper, the tallest building in the world.

The chosen designs will span the world, and take readers through a history of architectural styles. They will introduce them to vain kings and visionary architects, to classical columns, pointed arches and steel cantilevers. Alongside diagrammes and illustrations, the narrative will be structured around a number of key spreads, in which Stephen Biesty’s drawings will open up the Parthenon or the Pompidou Centre to show how they fit together and how people use them.

Not all the chosen examples will be cathedrals or palaces, however. As well as impressing us and housing us, buildings use up our resources. The last design chosen, the Straw Bale House in London, will show how we can build without harming our planet. At the same time, it will take us back to where our story started – with a home.