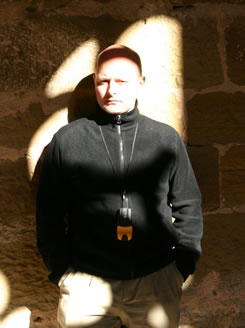 Patrick Garrett was born in London, grew up in Scotland, but has lived in Eastern Europe and Asia since the 1990s.


He began his working life as a television editor in Glasgow. After a stint doing TV commercials in Hamburg, during the turbulent Yeltsin years he moved to Moscow to work in television news for a range of international broadcasters including BBC, ITN, NBC, and CBS. He reported news events across the entire former Soviet Union, including numerous assignments to cover the vicious Chechen Wars in the mid 1990's.

He moved to Hong Kong in 1997 to observe its Handover of Sovereignty. Hong Kong proved to be a convenient location to research a memoir about his great aunt, veteran journalist Clare Hollingworth, renowned for being the first journalist to break the news of the outbreak of the Second World War, who had been resident in the city for decades.

Patrick is currently based in Germany. Alongside writing, his passions include magic, travel and photography. He holds a private pilot's licence and is something of an expert on the history of Soviet aviation.

I had only contacted Andrew to connect with the family of another of his author's, who had worked with my great aunt in the 1960s. But while perusing his website I noticed that the memoir I was writing was a good match for the subjects he handled. I wrote to Andrew again and got a friendly response. By chance he and I were both doing some research at the British Library in London so we arranged to meet for coffee at the Starbucks opposite. He immediately seemed like someone I could work with... and consistent feedback from other authors I spoke to confirmed his reputation in the industry. So I didn't waste any time looking for another agent. I stayed in occasional contact with Andrew over a couple of years until the memoir neared completion and he kindly agreed to represent me.