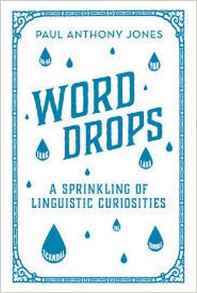 Did you know that the Jerusalem of ‘Jerusalem artichoke’ is actually girasole, the Italian word for ‘sunflower’? And speaking of artichokes, in French someone who is said ‘to have a heart like an artichoke’, avoir un cœur d’artichaut, falls in love with everyone they meet. And for that matter, in Scotland artichokes were once nicknamed worry-baldies, which ties in nicely with phalacrophobia, a fear of going bald. That derives from the same root as phalacrocorax, the Latin name for the cormorant, which literally means ‘bald raven’. And a group of cormorants is called a gulp, which means ‘to swallow noisily’ – as do slonk, frample, yaffle and gamf. But the opposite of all of those is probably fletcherization, which means ‘chewing your food at least 30 times before swallowing’.

Word Drops: A sprinkling of literary curiosities comprises a chain of 1,000 weird and wonderful words and word trivia like these, creating a fact-by-fact journey through the dictionary and the languages of the world from aardvark (which means ‘earth-pig’ in Afrikaans) to zenzizenzizenzic (a number raised to its eighth power), and back to again. Every fact here is cleverly connected to that which follows it, creating an engaging and unique sequence of words and word histories expanded throughout with short explanations and footnotes that provide fascinating and much-needed background to some of the most remarkable of entries.

Here you’ll find what you should call the dint in the bottom of a wine bottle, the arm of a starfish, the shock of getting into a cold bath, an improvement that only makes things worse, the exact weight of one olive, and an insultingly small tip or donation. Here too are the sign language equivalent of a tongue-twister, the opposite of déjà-vu, the language that calls the @ sign called a ‘spider monkey’, and the hardest word to guess in a game of hangman. And want to know how to play igunaujannguaq, how to give someone cold pig, or how to organise a panic party? The answers are all here.

Paul Anthony Jones was born in South Shields in 1983. Graduating with a Masters degree in English from the University of Newcastle in 2009, his first book The British Isles: A Trivia Gazetteer (2012) was inspired by a university study into the origins of English place names. This was quickly followed by two guides to English etymology, Haggard Hawks & Paltry Poltroons (2013) – named as one of best language titles of the year by The Guardian – and its sequel, Jedburgh Justice & Kentish Fire (2014). Paul also runs the popular tie-in Twitter account, @HaggardHawks, which ha...
More about Paul Jones