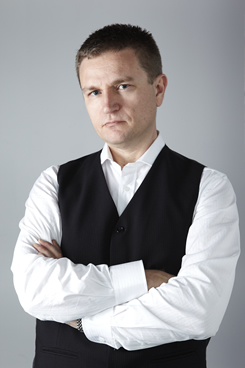 Author of A Polar Bear Ate My Head, his memoir of his years as a magazine editor both in the UK and Australia, Merrill now writes full-time. His next books, comedy guides to grandparenting and fatherhood, are to be published by Random House Australia next year.

He was an award-winning women’s magazine editor when he was inexplicably chosen for the biggest magazine launch in British history. When the weekly men’s titles, ZOO and Nuts burst onto the market, they transformed the magazine landscape and thrust Paul stumbling haplessly into a bewildering and surreal world in the full glare of the media spotlight.

He ran competitions to find the country’s Randiest Nanna, Hottest Horse Dentist and Ugliest Baby, and offered prizes of a ‘boob job for your girlfriend’, lesbian wedding, divorce and ‘voluntary euthanasia for a loved one’ (Love and Let Die).

In a series of other debacles, he tried to burn Spit the Dog, got a Groundforce star arrested in Greece and made Cheryl Cole burst into tears. He also wheeled Mo Mowlam through central London on a motorized bed when she became his sex agony aunt.

After an understandable backlash from right-thinking people across the nation, he launched a search for Britain’s Sexiest Feminist.

Then he was unexpectedly deported to Australia to launch the magazine there, and things got even more bizarre and, at times, disastrous.

In an eventful few years, he received three death threats, persuaded the Prime Minister’s daughter to strip off, adopted a four-legged chicken, was nearly sent to jail for inciting terrorism, had a dwarf basted and lost 130,000 pairs of inflatable boobs in the South China Sea.

Along the way, he received a personal letter from Arnold Schwarzenegger banning him from California, gave a serial killer his home address and upset Al Jazeera by offering Oprah Winfrey £300,000. Things took an unexpected turn when he found a kilo of cocaine and was accidentally accused of sexual harassing a cleaning lady.

I had googled the acronym for The Only Way Is Essex and must have mistyped. By the time I realised my error, I’d signed the contract.