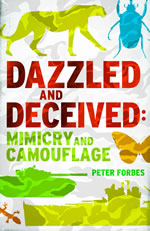 Nature has perfected the art of deception. Thousands of creatures all over the world – including butterflies, moths, fish, birds, insects and snakes – have honed and practiced camouflage over hundreds of millions of years. Imitating other animals or their surroundings, nature’s fakers use mimicry to protect themselves, to attract and repel, to bluff and warn, to forage and to hide. The advantages of mimicry are obvious – but how does ‘blind’ nature do it? And how has humanity learnt to profit from nature’s ploys?

Dazzled and Deceived tells the unique and fascinating story of mimicry and camouflage in science, art, warfare and the natural world. Discovered in the 1850s by the young English naturalists Henry Walter Bates and Alfred Russel Wallace in the Amazonian rainforest, the phenomenon of mimicry was seized upon as the first independent validation of Darwin’s theory of natural selection. But mimicry and camouflage also created a huge impact outside the laboratory walls. Peter Forbes’s cultural history links mimicry and camouflage to art, literature, military tactics and medical cures across the twentieth century, and charts its intricate involvement with the perennial dispute between evolution and creationism.

As Dazzled and Deceived unravels the concept of mimicry, Forbes introduces colourful stories and a dazzling cast of characters – Roosevelt, Picasso, Nabokov, Churchill, and Darwin himself, to name a few – whom its mystery influenced and enthralled. Illuminating and lively, Dazzled and Deceived sheds new light on the greatest quest: to understand the processes of life at its deepest level.

Peter Forbes initially trained as a chemist and worked in pharmaceutical and popular natural history publishing, whilst writing poems, and articles for magazines such as New Scientist and World Medicine. A stint as Southern Arts Writer-in-Residence (1984-6) led to the editorship of the Poetry Society's Poetry Review, Britain's premier poetry magazine, where he nurtured very many young poets in the early stages of their career, including Glyn Maxwell, Sophie Hannah, Gwyneth Lewis and Don Paterson.He has written numerous articles and reviews, many specializing in the relation between the arts...
More about Peter Forbes