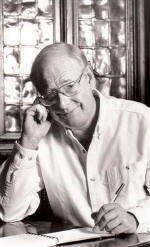 Peter Thompson, born in Melbourne, joined the London Daily Mirror in 1966. He was a Fleet Street journalist for twenty years, rising to night editor and deputy editor of the Daily Mirror, editor of the Sunday Mirror and a director of Mirror Group Newspapers.

In 1988 Thompson was the first Mirror Group editor to break ranks and expose the criminality of his boss Robert Maxwell. Thompson’s first book, Maxwell: A Portrait of Power, written with former Mirrorman and fellow Australian Anthony Delano, detailed the publishing tycoon’s rise to power through acts of fraud, deception and dishonesty.

Since becoming a fulltime writer, Thompson has written biographies on the Princess of Wales, the Duchess of York, Elvis Presley, Aristotle Onassis and the Onassis family, and Jack Nicholson. The first four titles were written in collaboration with his Sunday Mirror colleague Chris Hutchins.

His recent books - The Battle of Brisbane (2000), Kill the Tiger (2002), Morrison of China (2004) and Keep off the Skyline: Ron Cashman and the Diggers in Korea (2004) and The Big Fella: The Rise and Rise of BHP Billiton (2009)– have been written in collaboration with his long-time friend Robert Macklin. He had also written two further military histories:

The Battle for Singapore (2005) and Pacific Fury: How Australia and Her Allies Defeated the Japanese (2008).

I had used agents in the United States and Australia on books published in those countries during the 1990s but badly needed to find a new British agent as my previous one seemed to have vanished off the face of the earth without saying goodbye. My Australian agent Margaret Kennedy recommended Andrew Lownie and I rang him up. He suggested a meeting and I was immediately impressed with his commitment to his clients, his grasp of the publishing industry and his wicked sense of humour. He is now my sole agent.