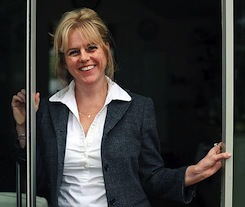 Rachel Kelly is a former Times journalist who is now a mental health campaigner, public speaker, and writer.

In her early thirties, Rachel was diagnosed with serious depression and subsequently suffered two major depressive episodes. These two episodes have become the defining events of her life. Since then, she has written about the condition, and how she has recovered, in books that have been read by tens of thousands of people. Her memoir about her experience of serious depression Black Rainbow was a Sunday Times bestseller .

Rachel now speaks publicly about her experience of depression and recovery in an effort to reduce stigma and educate people about the reality of mental illness. She also runs workshops for mental health charities to share what she has learnt about how to stay calm and well.

I heard about the agency through a novelist friend of mine who is part of my book club.