Ring of Spies: How MI5 and the FBI Brought Down the Nazis in America
Rhodri Jeffreys-Jones 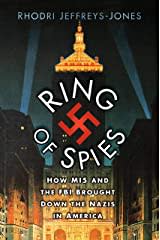 When we think of great American detectives, our minds turn to fictional characters like Easy Rawlings, or perhaps to the nineteenth century private eye, Alan Pinkerton. But Leon G. Turrou, a special agent for the FBI between 1929 and 1938, has a better claim than most to the appellation greatest US sleuth. Based on extensive new evidence obtained via a Freedom of Information application to the FBI, Ring of Spies explains why the Bureau’s leaders regarded Turrou as their most effective investigator, and supplies the first authoritative account of how he exposed the Nazi Spy Ring of 1938. The book:

•       examines the remarkable life-story of the Polish-born Turrou, and details his role in the FBI’s war on mobsters.

•       tells the tale of Turrou’s exposure of the Nazi spy ring in America.

•       explains how a tip-off from MI5 set the investigation in motion.

•       sketches the characters of Turrou’s principal opponents, for example Ignatz Griebl, the Nazi spy chief in North America who asked his mistress, Kay Moog, to establish a honey-trap brothel in Washington, D.C.

•       shows how when Turrou sold his story to the New York Post and to Hollywood, he incurred the wrath of President Franklin D. Roosevelt and FBI Director J. Edgar Hoover.

•       suggests that the case prompted Roosevelt to put the USA on a war footing.

Rhodri Jeffreys-Jones was born in Wales and received his higher education in Aberystwyth (BA, Alun Lewis Memorial Prize), Michigan, Harvard and Cambridge (PhD). He held post doctoral fellowships at Harvard, Free University Berlin and Toronto. Founder and now honorary president of the Scottish Association for the Study of America, he is emeritus professor of history at the University of Edinburgh. His books have appeared in several languages. They include In Spies We Trust: The Story of Western Intelligence (OUP, 2013) and The American Left: Its Impact on Politics and Society since 1900 (Edi...
More about Rhodri Jeffreys-Jones