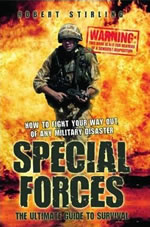 This is not a book about eating bugs and mushrooms. There are plenty of those books around if you want to become a boy scout. If you are, or want to be, a soldier – particularly a Special Forces soldier – then this is the book you need. It is about survival in rough conditions – when you have been taken hostage or prisoner of war; when you have crawled out of a downed helicopter behind enemy lines and the enemy are coming for you; or when your mates have been killed in a fire-fight in bandit country.

This ultimate survival guide is for those who choose to go into harm’s way. Soldiers, undercover operatives, security services and even those backpacking or exporting goods into some parts of the world could find themselves in serious trouble. In this book, you will learn how to: avoid being killed or captured when things go wrong; escape if you are caught; steal food; steal cars, boats and ‘planes; find your way home and fight to kill in the dirtiest ways you can imagine.

The scenarios detailed in this book include how to:

• Escape when an ambush has killed all your mates

• Escape from a POW camp or third-world prison

• Escape from a hostage situation

Some of what you will read in this book will shock you – it is about how to survive in the real world where power comes from the barrel of a gun. There are no prizes for making staying alive hard work – if someone is after you, and it’s you or them, let it be them

At the age of sixteen, Robert Stirling joined the British Army as a Junior Leader Paratrooper and so spent his first year of service undergoing a strict training regime which alternated weapons skills, drill, physical exercise and education all designed to prepare a soldier for leadership. Entering adult service and passing P Company, the Parachute Regiment selection, led to four tours in Northern Ireland and some covert experience wearing a donkey jacket and carrying an 9mm pistol. He was probably the second youngest ever to pass selection for the SAS at 19 years of age.Robert left the Bri...
More about Robert Stirling