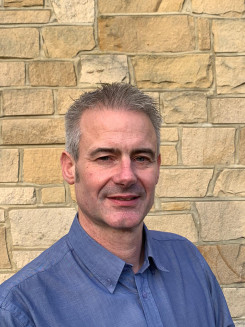 Robin Perrie was born in 1968 and grew up in the North East of England.

He went to Leeds University to study law. Every day his bus would pass within yards of where Jacqueline Hill, also a Leeds University student and Sutcliffe’s final victim, had been murdered a few years earlier.

After graduating in 1989 he edited the student newspaper for a year before working on local papers in Leeds alongside reporters who had covered the Ripper story from day one.

Their tales of the case fired his imagination even more for a story which had always fascinated him.

He joined The Sun in 1995 and  covered countless stories about Sutcliffe who was by now serving a full-life term and would never be released.

This involved interviewing his family, relatives of his murder victims and survivors of his attacks and led to him eventually securing direct access to Sutcliffe himself via Alfie James who had been communicating with him since 2004.

When Sutcliffe died in November 2020 he authored a 12-page supplement for The Sun based on the same material provided by Alfie which forms the core of our book.