City of Fortune: How Venice won and lost a naval empire
Roger Crowley 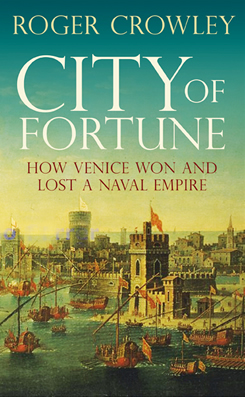 City of Fortune tells the story of Venice’s rise from lagoon dwellers to the greatest power in the Mediterranean. It was an epic five hundred year voyage that encompassed crusade and trade, plague, sea warfare and colonial adventure.

Along the way, Venice created an empire of ports and naval bases – the Stato da Mar – which flourished under the lion banner of St Mark and whose sole function was to funnel the goods of the world back into the warehouses of the lagoon. Venice became, for a time, the axis of world trade and the richest place on earth. The city was a brilliant mosaic fashioned from what it bought, traded, borrowed and stole across the Mediterranean basin.

The path to empire unfolded in a series of extraordinary contests – the sacking of Constantinople in 1204 that launched the Stato da Mar, the slugging contest with Genoa fought to the death within the lagoon itself, and the desperate defence against the Ottoman empire. The long arc of ascent, domination and maritime decline is the subject of this book.

City of Fortune is a rich narrative about trade and warfare, seafaring and piracy, and the places where Venetian merchants sailed, traded and died: Constantinople, Crete, Alexandria, the Black Sea, the Adriatic and the shores of Greece. It begins symbolically on Ascension Day in the year 1000 and ends with an enormous explosion off the Peloponnese in 1498 – and the calamitous news that the Portuguese had pioneered a sea route to India, strangling Venice’s lucrative spice trade.