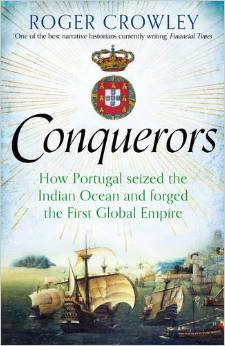 As remarkable as Columbus and the conquistador expeditions but far more wide-ranging, the dynamic burst of Portuguese voyaging at the start of the sixteenth century  is one of the tipping points of world history : the moment that the world went global. Within a short time span a tiny country, whose population did not exceed a million, created a maritime empire that stretched from Brazil to Nagasaki.

Conquerors  tells the almost forgotten story of how  Portugal’s navigators cracked the code of the Atlantic winds, launched the expedition of Vasco da Gama to India and beat the Spanish to the spice kingdoms of the East – then set about creating the first long-range maritime empire. In an astonishing blitz of thirty years, a handful of visionary empire builders, with few resources but breathtaking ambition, attempted to seize the Indian Ocean, destroy Islam and take control of world trade.

This is history at its most vivid – a epic tale of navigation, trade and technology, money and religious zealotry, political diplomacy and espionage, sea battles and shipwrecks, endurance, courage and terrifying brutality. Drawing on extensive first-hand accounts, it brings to life the exploits of an extraordinary band of conquerors – men such as Afonso de Albuquerque, the first European since Alexander the Great to found an Asian empire – who set in motion the forces of globalisation.

Portugal was the imperial pathfinder, the template for a wave of successors. Its empire connected the world and created a framework for profound interactions. It left a huge and long-lasting influence on the culture, food, flora, art, history and languages of the globe. It marked the start of 500 years of domination by the West which is only reversing now.