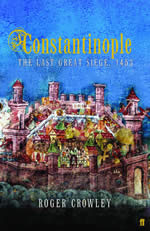 ‘I shall tell the story of the tremendous perils and the loss of Constantinople, which I observed at close quarters with my own eyes.’ Leonard of Chios.

Constantinople: The Last Great Siege tells the story of one of the great forgotten events of world history - the fall of Constantinople to the Ottoman Turks.

For a thousand years Constantinople was quite simply the city: fabulously wealthy, imperial, intimidating - and Christian. Single-handed it blunted early Arab enthusiasm for Holy War; when a second wave of Islamic warriors swept out of the Asian steppes in the Middle Ages, Constantinople was the ultimate prize: ‘The Red Apple’.

Constantinople is the taut, vivid story of the final struggle for the city told largely through the accounts of eyewitnesses. For fifty-five days a tiny group of defenders defied the huge Ottoman army in a seesawing contest fought on land, at sea - and underground. During the course of events, the largest cannon ever built was directed against the world’s most formidable defensive system, Ottoman ships were hauled overland into the Golden Horn, and the morale of defenders was crucially undermined by unnerving portents. At the centre is the contest between two inspirational leaders, Mehmet and Constantine, fighting for empire and religious faith, and an astonishing finale in a few short hours on 29 May 1453 - a defining moment for medieval history.

1453 is both a gripping work of narrative history and an account of the war between Christendom and Islam that still has echoes in the modern world.