Empires of the Sea
Roger Crowley 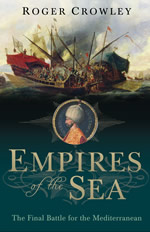 In 1521, Suleiman the Magnificent, ruler of the Ottoman Empire at the height of its power, dispatched an invasion fleet to the island of Rhodes. It was to prove the opening shot in an epic struggle between rival empires and faiths for control of the Mediterranean that consumed the centre of the world for sixty years.

Empires of the Sea tells the story of this great contest. It is a fast-paced tale of spiralling intensity that ranges from Istanbul to the Gates of Gibraltar and features a cast of extraordinary characters: Hayrettin Barbarossa, the pirate who terrified Europe, the risk-taking Emperor Charles V, the Knights of St John, last survivors of the crusading spirit, and the brilliant Christian admiral, Don Juan of Austria. Its brutal climax came between 1565 and 1571, six years that witnessed a fight to the finish, decided in a series of bloody set pieces: the epic siege of Malta, the battle for Cyprus and the apocalyptic last-ditch defence of southern Europe at Lepanto, which fixed the frontiers of the Mediterranean world that we know today.

Empires of the Sea is the sequel to Roger’s Crowley’s much-praised, Constantinople: The Last Great Siege. It is page-turning narrative history at its best – a story of extraordinary colour and incident, rich in detail, full of surprises and backed by a wealth of eyewitness accounts. Its denouement at Lepanto is a single action of quite shocking impact: Cervantes called it ‘the greatest event witnessed by times past, present and to come’. The book is also a narrative about technology and money. Lepanto was the Mediterranean’s Trafalgar, the last and greatest moment in the age of the galleys before sailing ships with broadside guns swept all before them, and it was paid for, on the Christian side, with Inca gold.