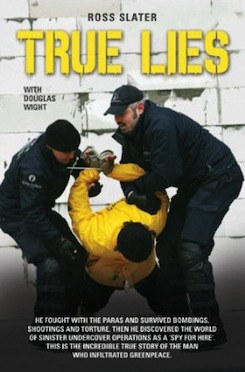 When ex-soldier and policeman Ross Slater was hired to provide security for leading members of Greenpeace he got more than he bargained for.

Not only would he be involved in planning some of the environmental group's most audacious stunts but his contacts in Special Branch came up with an even juicier role for him – as a double agent spying on Greenpeace's activities.

With split loyalties, Slater had to tread a fine line between fulfilling his duties to the eco-warriors while alerting the authorities whenever he felt their stunts risked endangering the lives of the public.

In this action-packed expose on how British police spy on green groups, Slater reveals how he:

As the role of undercover police officers comes under scrutiny, Slater tells how hard it is to stay straight in the face of extreme temptation in a world where criminality, drug-taking and sexual shenanigans are rife and gives a unique perspective on what it takes to be a double agent.

Ross Slater is a former lance corporal in the Parachute Regiment who served six years duty from 1974 to 1980, including a perilous tour of duty in Northern Ireland. Lucky to survive the IRA’s first remote-controlled car bomb blast, he eventually left the army to become a cop with Thames Valley Police.Seeking more adventure he landed a role as a security consultant to the Sultan of Brunei before striking out on his own as an independent investigator. Among his roles was as an undercover detective working at a food wholesalers reporting to the Regional Crime Squad.Slater then re-joined ...
More about Ross Slater,

Douglas Wight is the Sunday Times best-selling ghost writer of nine books, including the autobiographies of Olympic gold medal winning GB hockey player Sam Quek, former world boxing champion Nigel Benn, snooker legend John Virgo and Hollywood actress Emily Lloyd. He also ghosted memoirs for an undercover cop for the Met, a money launderer in Miami and a woman who made legal history after surviving years of abuse. In addition he has written three celebrity biographies, including one that was written and self-published into the high street in three months. He is also a leading freelance...
More about Douglas Wight