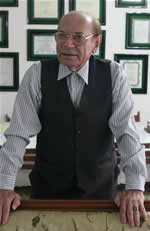 Sayed Mahmoody trained in the UK and the USA. He lived and worked in America for more than twenty years where he established a successful practice as an anaesthetist and consultant in Osteopathic Manipulative Therapy (OMT). OMT is a holistic treatment that deals with the patient as a whole being. OMT practitioners use their hands to apply pressure on muscles, nerves and joints – to relieve pain, stiffness and tension in the whole body.

An aristocratic Iranian by birth. Sayed’s mother and father died by the time he was eight-years-old, and he was raised by his sister. Although a strict Muslim, he believed that Islam is a religion of tolerance, enlightenment and peace.

Sayed returned to Iran with his wife, Betty and daughter, Mahtob with the aim of using his medical knowledge to help treat the victims of the Iran-Iraq war. Days after his green-card expired, Betty left Terhan without warning, taking Mahtob with her on a Swissair Flight to the US. She then divorced Sayed in a US court where he had no voice, so gaining control of all the family’s assets, including substantial properties and savings. The court case and subsequent publication of his wife’s book, Not Without My Daughter, made him persona non grata in the USA.

Sayed never remarried and continued to work full-time as an OMT practitioner, anaesthetist and university lecturer in Tehran until his death aged seventy in August 2009.

I know I had an interesting story to tell, but did not know how best go about it. Then Mr., Andrew Lownie was introduced to me by a friend who had come across his website. I was impressed with what I read in his website, and realized he is very much familiar with Middle Eastern and Islamic Cultures. I contacted him. He responded very promptly and courteously. He wanted to know further details. I provided him with my book. He was genuinely interested in it, and stayed involved throughout the process bearing with me many ups and downs through this time, giving me extremely valuable advice. I have received much support and encouragement from him. Mr. Andrew Lownie is my first choice and he has proven himself to be not only a literary AGENT but also a caring FRIEND. He has also proven a motto we medical students had when taking multiple choice tests - THE FIRST CHOICE, IS THE BEST CHOICE!