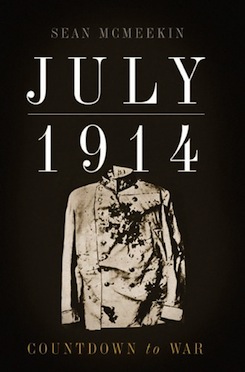 The outbreak of the First World War was, as Winston Churchill said, “a drama never surpassed.” At the distance of a century, the characters still seem larger than life: Archduke Franz Ferdinand, the brooding heir to the Habsburg throne; a bevy of fanatical Bosnian Serb assassins who plot to murder him while he visits Sarajevo; Conrad and Berchtold, the Austrians who seek to exploit the outrage; Kaiser Wilhelm II and Bethmann Hollweg, who recklessly urge on the Austrians; Sergei Sazonov, Tsarist Russian Foreign Minister, trying to live down a reputation for cowardice; Poincaré and Paléologue, two French statesmen who urge on the Russians and help Sazonov overcome his fears; and not least Churchill himself, who, alone among Cabinet officials in London, perceives the seriousness of the situation in time to take action.

July 1914 tells the story of Europe’s countdown to war through the eyes of these men, between the bloody opening act on 28 June 1914 and Britain’s final plunge on 4 August, which turned a European conflict into a world war. Some of them mastered events quickly; others fought from behind or rode the whirlwind nearly blind.

While there was an element of tragedy in the outcome, it is not really true that, as many popular historians have told us, “no one wanted the war.” The outbreak of war in 1914 was no accident of fate. Individual statesmen, pursuing real objectives, conjured up the conflict – in some cases by conscious intention. While some sought honorably to defuse tensions, others all but oozed with malice as they rigged the decks for war. Showing the fearless judgment for which he is known, Sean McMeekin names names in July 1914, making clear as never before who was responsible for the catastrophe.