MI6: Inside the Covert World of Her Majesty's Secret Intelligence Service
Stephen Dorril 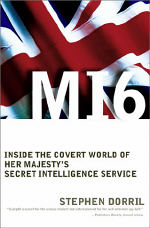 MI6 is one of Britain's most elusive organisations. Despite the architectural prominence of its London headquarters at Vauxhall Cross, its operations remain veiled from scrutiny. To write about Britain's Secret Intelligence Service risks harassment and prosecution, as former members and current commentators know to their cost. It is impossible, under the laws presently shielding MI6 and its sister service, MI5, to write about its daily activities.

But MI6 has a history, and that reveals a great deal. At the beginning of the Cold War, Britain was a global power literally dividing up the world. By 1992 influence abroad had been lost in the Middle East, most of Africa and large swathes of Asia, and even in Europe Britain seemed exiled and isolated.

What had MI6 been doing? MI6's postwar activities were grounded in prewar attitudes and practices, at home in the clubs of Pall Mall and St James but little suited to a retreating post-imperial power. Britain's management of the Cold War was in the itching hands of a mixture of frustrated former members of the wartime SOE, desperate for active military engagements, anxious reactionaries who saw more to fear from Clement Attlee's Labour Party than from any red menace abroad, and a few socialist devotees for whom communism was the future and spying the career of choice.

Here for the first time is an operational history of MI6's activities and attitudes. Dorril's is a searching story of the characters and situations in which the games have been played, and of half a century of international political intriguing, spying and thuggery - all in the name of intelligence.

Stephen Dorril is Senior Lecturer in Print Journalism in the Media and Journalism Department of Huddersfield University. He has been investigating the British security and intelligence services for more than twenty years. He is particularly interested in the realtionship between intelligence and politics.He has appeared on numerous radio and television programmes - Panorama, Media Show, Secret History, World at One, NBC News, Canadian television, History Channel, French television etc. - as a specialist and consultant on intelligence matters. He is consultant to a forthcoming series on Chan...
More about Stephen Dorril